For decades now, rural citizens have been at a vast disadvantage when it comes to leveraging technology. Lack of infrastructure in these areas have left these people without capable cell service, internet connectivity and even some calling features. The U.S. Census Bureau Director John H. Thompson noted that rural areas cover 97 percent of the nation’s land, and contain 19.3 percent of the population – or about 60 million people. Microsoft has launched an initiative to bring faster, quality internet service to rural areas to bring these citizens into the connected age.

A look at the Rural Airband Initiative

Microsoft recently announced that it aims to provide broadband access to more than 2 million people by 2022 through its Rural Airband Initiative. The organization plans to leverage unused channels in the television spectrum, or white space, to bring broadband internet service to a several mile radius. Gizmodo noted that this technique can penetrate buildings and other obstacles, and doesn’t require the extensive infrastructure that urban areas need. The catch is that there will still need to be some elements put in place in order for citizens to access these offerings. 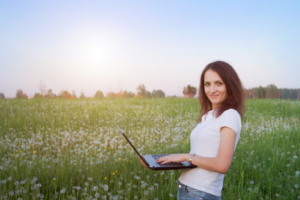 Microsoft is looking to bring internet services to rural areas.

The organization will likely have to build special base stations, equip them with antennas and facilitate them. Customers will need special receivers to turn the signals into something their computer will understand. This will all take investment, but it is expected to be 80 percent cheaper than a fiber connectionand half the price of wireless services, St. Louis Post-Dispatch reported. While the infrastructure itself may cost less overall, customers might have to buy the hardware initially for $1,000. While Microsoft expects the price to drop to $200 per device by next year, consumers still need to be for the access, which has been stated to be price competitive with regular internet services.

Technology organizations have worked for years trying to provide the best solution to rural broadband needs. Facebook’s laser-powered drones, Google’s balloons and Elon Musk’s satellites still remain theoretical possibilities, but white space has already been proven to work. Microsoft chose 12 states to pilot their program to bring internet to rural communities, and their method of combining television signals, satellites and fiber has been approved by the Federal Communications Commission, Wisconsin Public Radio reported.

“The white space approach has already been proven to work.”

The initiative is expected to bring major benefits to residents and businesses alike. WPR noted that many people will frequently park outside of businesses with Wi-Fi connections or bring their children back to schools in order to use the internet and complete online homework assignments. Organizations will be more enticed to come to the area as well, ensuring they have the connectivity they need to access resources and deliver quality customer service.

Tech giants have been searching for the right answer to the rural internet deficiency for years now, but Microsoft’s initiative could be a major step forward in providing a cheaper, easier alternative. To keep up with Microsoft advancements and leverage their solutions in your own company, partner with a certified reseller like Pinnacle Business Systems.