Why Pinnacle is a fan of Johnnie Williams and his Paralympic career
18193
post-template-default,single,single-post,postid-18193,single-format-standard,theme-bridge,woocommerce-no-js,ajax_fade,page_not_loaded,,qode-title-hidden,side_area_uncovered_from_content,qode-content-sidebar-responsive,columns-4,qode-theme-ver-13.8,qode-theme-bridge,wpb-js-composer js-comp-ver-5.7,vc_responsive

We all have them – a friend of a friend who ends up being one of your very best of friends, a new business partner, or your “in” for coveted floor seats to the NBA Finals. The possibilities are endless and it’s that very possibility that makes chance encounters so unexpectedly rewarding. U.S. Veteran and Paralympic Athlete Johnnie Williams and Pinnacle’s chance encounter happened at a local Edmond jazz lab in 2014. Pinnacle’s CEO, Rob Anderson, and Johnnie met through a mutual friend and Rob was instantly appreciative of Johnnie’s journey and story.

Rob shared he would never forget Johnnie’s response that night when he thanked him for his service and sacrifice. “No thanks needed,” Johnnie said. Johnnie then went on to share that he’d do it again in a heartbeat because of his strong belief in the cause; saying that even knowing the outcome would be paralysis.

A pile of rocks

Johnnie grew up in Tampa, Florida, and when he was 17 years old he signed up for the delay entry program of the Army, allowing him extra time to decide if the Army would indeed be his career. After graduating high school, he decided the Army was his next best move and headed out to Fort Benning in Columbus, Georgia, for basic training.

After completing basic training, he was stationed at Fort Gordon in Augusta, Georgia, and then assigned to a new post in Germany before being sent to Iraq. During the first five months in Iraq, his job was to convoy groups of vehicles back and forth as a source of communication between different units.

“The number one rule while convoying is to never let a civilian vehicle get in between a convoy,” said Johnnie.

On the fifth of May, he had just left an outpost in a convoy when a civilian vehicle got in between his vehicle and another from his unit. As he attempted to pass the civilian vehicle, he felt a thud and a sharp jerk as his Humvee was knocked off the road, flipped, and then rolled over on top of him.

“The sensation I felt was like lying on a pile of rocks, putting pressure on my back,” Johnnie said. That sensation was later identified as a broken spine, two punctured lungs, a broken pelvis, his abdomen ripped open, and a severed artery in his leg leaving him paralyzed from the waist down.

As he was loaded into a medivac by fellow soldiers, he remembers someone saying, “Don’t worry buddy, everything is going to be alright.” The next thing he remembers is waking up in a hospital in Germany in critical condition, five days later.

The Difficult Path to Recovery

Johnnie Williams spent almost three months in the hospital in Germany recovering. And has since had three surgeries on his abdomen to heal and close the wound. At the time of his injury, the Army immediately discharged him because the initial report after his accident stated that he would be dead within 72 hours. Because he was discharged, the Army would not pay to fly his family to Germany. During those three months of rehab, he found himself incredibly lonely and angry but focused on his family.

He was then sent to Walter Reed National Military Medical Center and placed in ICU for another three months. From Walter Reed, he went to the Tampa Veteran’s Hospital to recover further be closer to his family for support. After another three months, he finally left the hospital (in September of 2004) and started focusing on para-athletics which helped him feel normal and closer to the person, the athlete, he once was before he was injured.

Johnnie competed in para-sports for a few years but being a young 20-something the party lifestyle took hold. For the next seven to eight years he bounced back and forth between going to school, competing, and partying. Never giving anything his full attention.

In 2010, his fast-paced, live-in-the-moment lifestyle caught up with him.

Johnnie shared that he was severely depressed and contemplated killing himself. On one particular night, he held a pen in one hand, writing a suicide letter, and a knife in the other. As he was writing the letter he realized that he had so much to live for and needed to get help. The next morning, he drove to the Tampa VA and sought counseling. 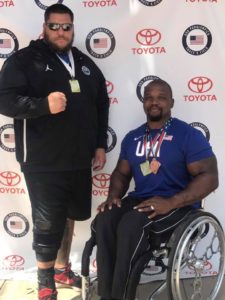 A fresh start in Oklahoma

Shortly after he married his wife he found himself struggling to adjust to married life, dealing with consequences of his party lifestyle, and grieving the loss of a good friend. In 2012, he and his wife decided to leave Tampa and start fresh somewhere completely new.

Leaning on his Paralympic aspirations, the couple looked to the University of Central Oklahoma’s Paralympic training facility and what a life in Edmond, Oklahoma, might look like. Johnnie leveraged a connection he had with the U.S. Paralympics organization and was able to connect with one of UCO’s coaches and has been training with him ever since. He has competed in some of the top Paralympic competitions in the world such as the Pan American Games in Toronto, the World Championship in Katar, and the 2016 Paralympics in Rio!

This year, Pinnacle Business Systems became an official corporate sponsor of Johnnie Williams’ Paralympic journey. The entire Pinnacle team sent their wishes as he competed at the Paralympics track & field National Championship June 2nd-4th where he became the 4x National Champion in the discus and placed third in javelin!

We are forever appreciative of his service and just as a grateful to call Johnnie a neighbor, and friend.